There are many causes for sleep apnea, including obesity and obstructed air passages. Its symptoms are loud snoring sounds that are sometimes interrupted by a few seconds (or minutes) of lapses in breathing. The silence is often followed by loud gasps for air until regular breathing resumes.

Sufferers of sleep apnea often have trouble functioning during the day and may fall asleep at their desks or even while driving a car. This extreme tiredness often leads to depression, high blood pressure, loss of memory and impotency. That’s why a swift diagnosis is so important and why those who suffer from sleep apnea must change their lifestyle immediately. 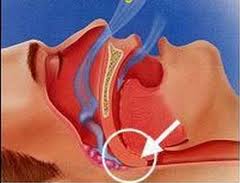 Here are some ways to prevent and even cure sleep apnea:

“Apnea” is the Greek word for “without breath.” When you succeed in regulating how you breathe when sleeping, sleep apnea will be a thing of the past and you’ll be more relaxed, rested and ready to meet the world.